18×15″ Bass Drum, 6mm, rich round and punchy sound. The 18″ Bassdrum sounds significantly fuller and bigger than you would expect from its size.

Thanks to the shallow shells the drum kit responds quickly and precise. All shells come with individually cut 45° bearing edges, manually sanded, a bit rounded on batter side. Mellow and warm sound guaranteed! Over all a well balanced, open, warm sound, as sought after in rock and jazz music. In direct comparison with the walnut shells, the maple shells have a bit more punch and a bit less bottom, especially the bass drum, which makes it the first choice for most music genres. 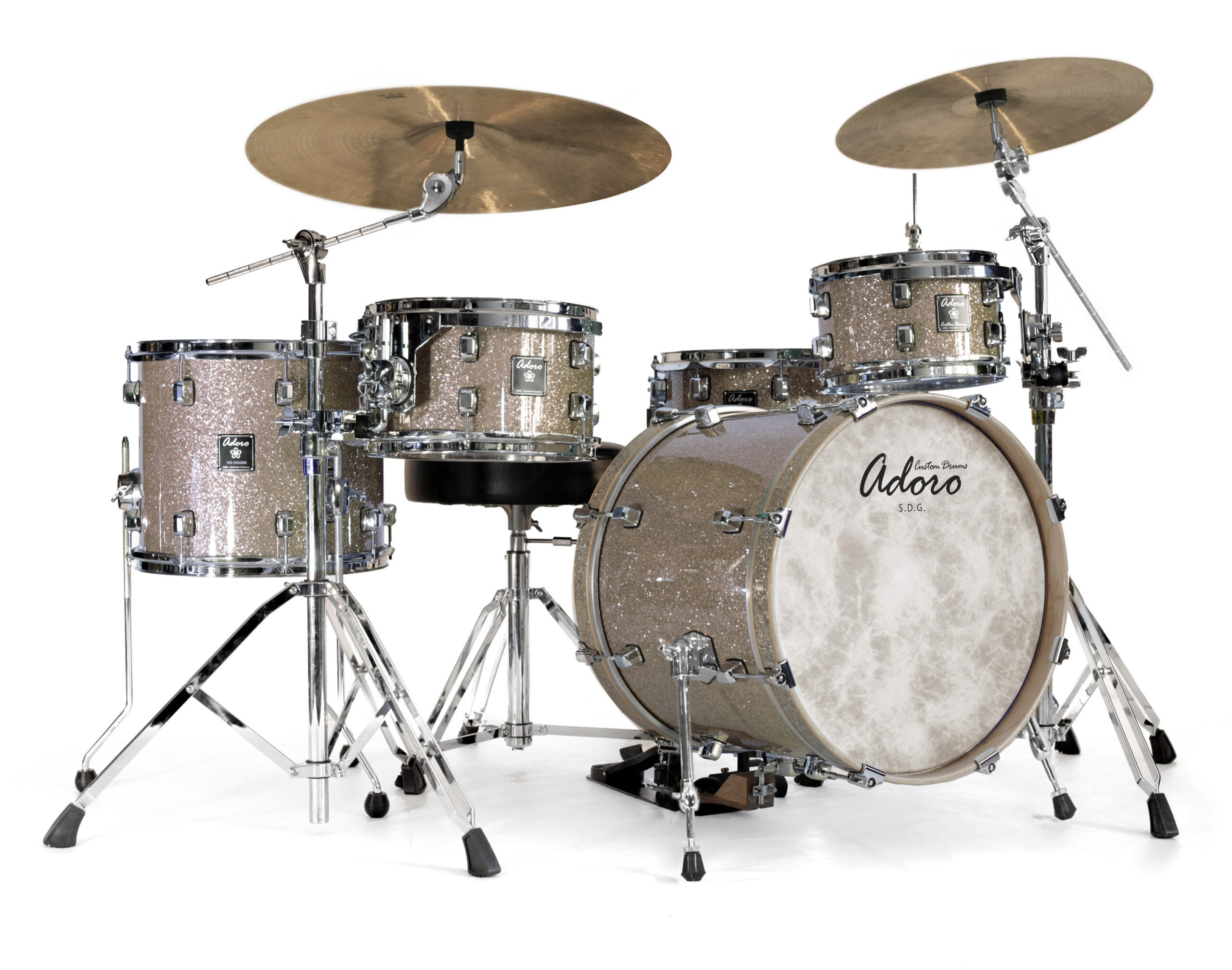 „Adoro“ is Spanish for “I adore“. The Worship Series is actually meant for adoration: drums for worship bands and events with small audiences where the drums are not fully amplified, and a good, low volume stage sound is needed.

The idea behind the Worship Series was to build a drum line that can be played at a really low volume, thus sounding full and well ballanced. At worship gigs (as well as at club gigs or any other small event), often the drums are the loudest instrument and quite often won‘t be picked up directly with microphones.

The biggest task for the drummer is to play as low volume as possible, which can result in bad drumming, but surely in a bad drum sound: usually drums are build for large stages, where you can play as loud as you want to, and not with small clubs and worship settings in mind.

From a well balanced low-volume drum set also the resulting stage-sound benefits. It becomes more easy to hear each other and to listen to each other, so especially in situations where not the drummer but the worshipleader is leading, and the music is improvised alot, you really benefit from a transparent, warm sound that lets everything be heard.

Even when played loud, the Adoro Worship Series is still recognizable lower in volume, and so fitting much better into the overall sound concept: a drum set with the acoustic sound of a well balanced amplified kit.

What customers have to say: 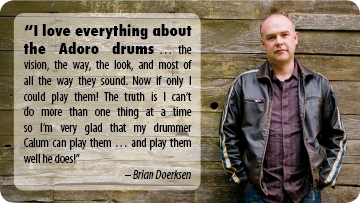 Calum Rees (Brian Doerksen): “My Adoro drums have quickly become the most requested set-up for both recording sessions and live events. They have a focused tone with an extremely broad range of tuning capabilities resulting in a very flexible instrument. My 20 kick catches both recording and live engineers off their guard, with that quizzical first look at the ‘small’ kick i’ve brought along turning into a huge beaming smile upon the first ‘boom’! It is also just as effective in a more muted, intimate jazz/fusion musical situation. Live engineers will love the control of the source sound at their disposal, enabling them to present a big open roomy sound or a more focused processed sound, with flexibility all the way between. I’ve yet to find an musical situation where these drums do not excel. I heartily recommend Stefan and the Adoro team to anyone who is looking for a top quality instrument that will both inspire and produce fantastic results. Churches should also look into investing into these drums before shutting their drummers away behind that dreaded perspex screen. The drum construction enables a full tone without the need for heavy hitting, and your drummers will be thankful for an instrument that can convey every nuance in their playing. If they are lacking somewhat in the nuance department then these drums will help them find it! Playing an Adoro set of drums inspires me to further my ability and discover more of the drummer I could be… plus I really like the green sparkle finish!” (Calum Rees) 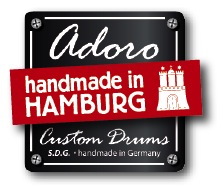 Lance Spratt (Audio Engineer): “I was first introduced to your drums by Calum a number of years ago when I first started mixing live sound for Brian Doerksen. The venue seated around 2000 people, and I was a bit hesitant with the kit that Calum had brought to the gig. It was relatively small in comparison to other kits comm get the kit to sound the way I wanted, and b) that I wasn’t having to accommodate or work around the levels coming from the stage. The kit fit in the mix really nicely, and didn’t seem to acoustically engage the rooms we played near as much, whether the rooms were large or small, acoustically challenging or not. When reviewing live recordings, it was clear that there was less bleed into the vocal mics than I was accustomed to. So far, a very positive experience from a FOH engineering perspective. And when it was time to let’r’rip and let the animal out of the cage, Calum and his little Adoro kit could rock and roll with BIG sound that never became obnoxious. Perfect! Speaking of cages and drum shields, the rider specifically requests that the venue remove it from the stage… because we don’t need it! From an audio engineers perspective, I can’t think why a church wouldn’t want an Adoro kit in their room. It doesn’t interact with the room near as much as other kits, creates less level on the stage, and therefore doesn’t interfere with monitor mixes or bleed into open mics, eliminates the need for a shield or cage, and takes up less space, while still capable of working well for a broad range or musical requirements. I can’t speak to why or how churches are buying drums, but I wholeheartedly back the use of the Adoro drums whether in church, or other live sound settings. And the fact that Calum Rees endorses them, confirms for me that.”

There are no reviews yet. 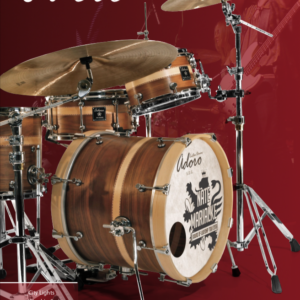 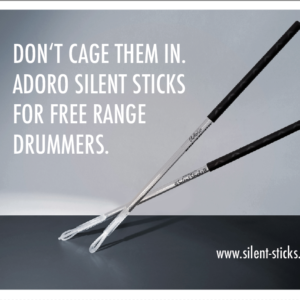 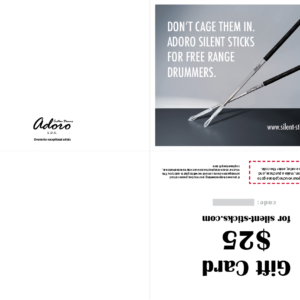 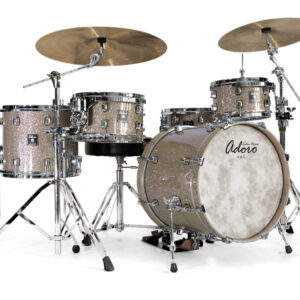 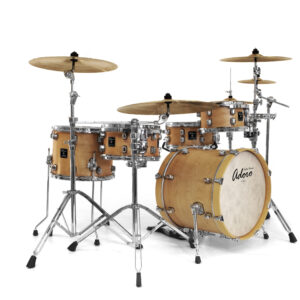 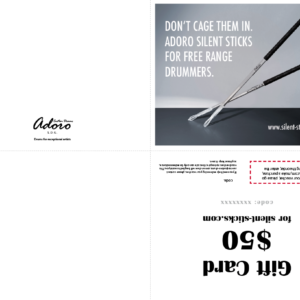 Adoro is a drum manufacturer origined in Hamburg, Germany. We specialize in drums for acoustic settings, the silent sticks are just one of many products we hand manufacture. We love what we do, and we are happy when you enjoy our products too.

If you have questions, or want some councelling in drum affairs, please do not hesitate to contact us!

Please make appointments before showing up. Thanks!