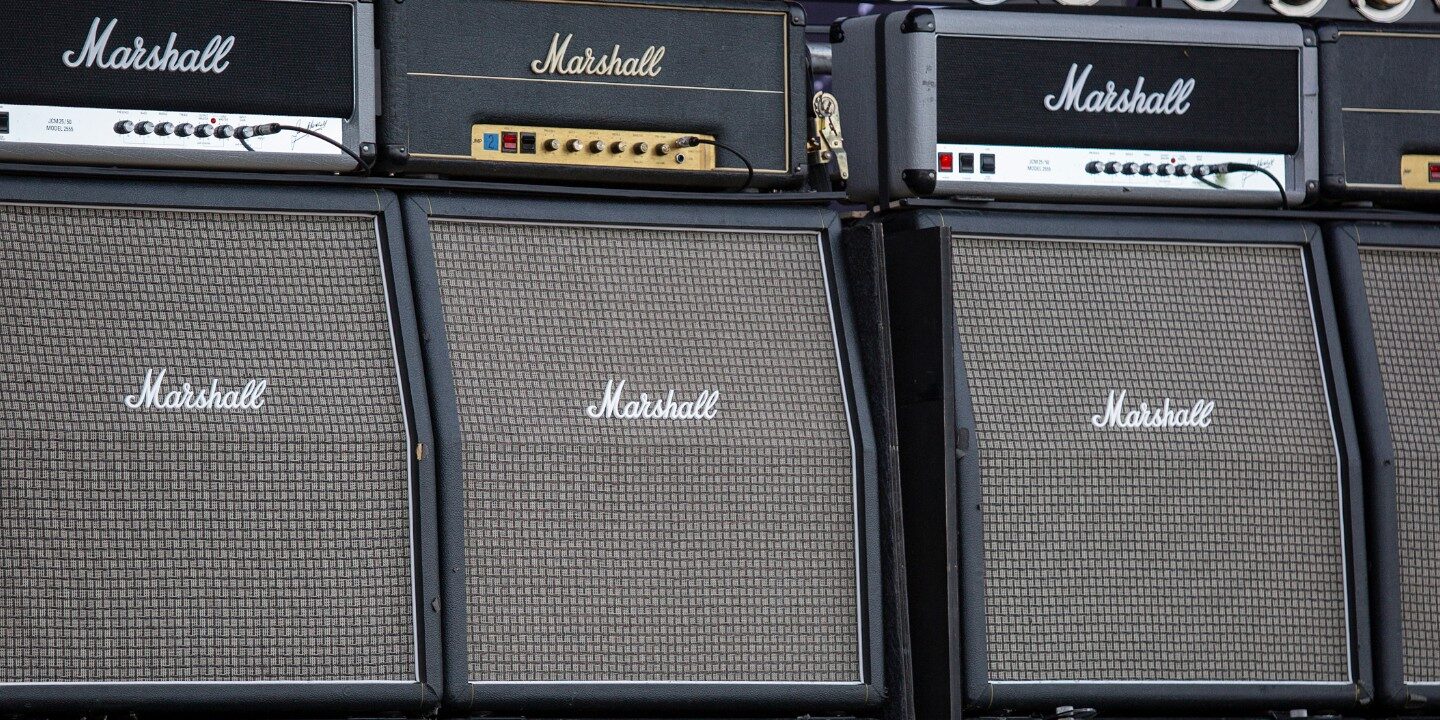 When you go to a gig and the band is wearing in-ear monitors, the audience is stuffing in ear plugs, and the chap running the soundboard is deaf, it is obvious that something has gone wrong with making music.

Sure, 1940s big band jazz was a sweeping sonic experience, 1950s rock ‘n’ roll could get raucous, and the Beatles and Kinks could shake it up in the early 1960s. But there was a moment in time when drumming got loud. Really loud. It started in 1965, took hold in 1966, and by 1967 a full-fledged assault by high-decibel, chandelier-shaking volume was underway. And it was here to stay.

This matter of volume arose soon after the arrival of the Marshall amplifier, most notably the Marshall 100-watt ‘stack’ (there was also a 200-watt stack and a 50-watt half-stack…both also lethal), which the firm of Jim Marshall, himself a drummer, developed with input from Pete Townshend and John Entwistle of the Who. Their idea for a massive 8 x 12” speaker cabinet proved to be much too big and heavy for their roadies, so it was cut across the middle, creating the much revered (or reviled) Marshall 4 x 12” cab. With all that Marshall power cranked to the max, Townshend bashing his guitars into the realm of intense feedback, and Entwistle playing basses strung with piano wire (‘round-wound’ strings were his idea), stage volume not only drove the meters into the red, it shifted the balance away from the drums – the beat was getting lost in the churn of screaming six-strings and rumbling low end. That’s because drums were not mic’d at the time, so even with the drummer bashing harder and harder, they were no competition for the air being shifted at full volume through stacks of 4 x 12” speakers. And it would be several years before on-stage monitors, so, paradoxically, they played even louder just to hear themselves. And with Keith Moon on drums, that means The Who were plenty loud before the amps were even switched on!

A year later, by the end of 1966, blues-rock trio Cream had arrived. With Eric Clapton on guitar, Jack Bruce on bass, and Ginger Baker drumming, it was a formidable trio formed by three of London’s hottest players. And they too had Marshall stacks. First there was one for bass and one for guitar. Then there were two for bass, so there had to be two for guitar. Drummer Baker, whose double bass kit was – as with Keith Moon’s – inspired by seeing jazzer Sam Woodyard of the Count Basie Band at a London gig – was furious about the volume, claiming it was deafening him as well as forcing him to bash his drums, not play them. Despite selling millions of records the band split after only a couple years, due in part to Baker constant arguing with Bruce about the bass being much too loud. Even after the band’s 2005 reunions in London and New York Baker was still furious about Bruce’s volume. The bass-playing Scotsman was much too loud!

But as 1966 advanced into 1967, the volume of the Who and Cream took hold. And those Marshall amps, well, they looked and sounded so cool that soon Hendrix, the Jeff Beck Group, then Led Zeppelin…all the major British bands had stacks lined across their stage. In America the trio Blue Cheer led the revolution. They were so loud that it was necessary to record part of Outside/Inside album with their Marshalls out on Pier 57 in New York Harbour. It was costing them over $1,000 per day to be there…and be loud.

By now, the late 60s, with bands playing outdoor concerts and bigger venues, microphones were being used to make those amps even louder. Drums too, as mics, typically two or three, started to show up around kits. One for the bass drum, an overhead and maybe one on the snare. Everything was now louder than loud, with some drummers following the likes of Carmine Appice, the archetype of heavy rock drumming, and going with bigger drum sizes (Led Zeppelin’s John Bonham’s played a kit based on Carmine’s). Others removed the bottom heads of their toms and stuck a mic inside, something started by session ace Hal Blaine but popularised by Appice. Same with the bass drum – stuff a pillow in it to make the sound punchier and add a mic to make it louder. With the blisteringly hot Beck, Bogert & Appice, Carmine had two massive monitors, one on each side of his kit – a Fender Dual Showman, and a Marshall stack. Crazy loud!

By the mid 1970s, with bands playing much bigger venues – 20,000 to 80,000 capacity arenas and stadiums had entered the picture – high-powered sound systems took over from big amps in terms of music projection. But the big amps and big drums stayed, even in small clubs. They’d become a token of coolness. Single- and double headed power toms, bigger and longer bass drums, deeper snares, thicker heads with power dots or EQ rings, and larger and heavier cymbals on heavy-duty hardware were the things to have. Sticks got bigger and heavier too, with some being made of virtually indestructible fiberglass or carbon fibre. There were also carbon fibre drums. And harder, non-porous synthetic shells including phenolic and fiberglass, which sounded bright, cutting…and loud. At least one company devised a metal liner for its bass drum as a means of increasing its volume, though later settled on high-gloss urethane paint for the same purpose. Other companies created metal drums of stainless steel. Volume had become the currency of rock ‘n’ roll. Indeed, Loud had become big business.

And it stayed that way through the eras of hard rock, soft rock, arena rock, speed metal, the MTV 80s, the LA ‘big hair’ bands, the grunge of the 90s. Even jazz got loud when in the early 70s, Mahavishnu Orchestra, Return to Forever and Weather Report, with the double drum kits of Billy Cobham, Alex Acuna, Chester Thompson and others, the blistering guitar of John McLaughlin and the soaring synths of Chick Corea and Joe Zawinul emboldened the spirits of Bud Powell, Grant Green and John Coltrane with high-wattage energy. Call it jazz-rock, call it fusion; it was quite a few notches up the volume ladder. Even Miles Davis, inspired by Hendrix, got kinda loud.

Volume ran rampant and unchecked for about forty years, until about 2005, when, inspired by 1950s amplifiers, some guitarists started to downsize their wattage and develop their tone. Instead of 50- or 100-watts, they went with 20- or 30-watts, often with the ability to switch down to 15, 10, 5, even 1 watt. The ‘lunchbox’ amps – tiny terrors that fit on a dinner plate gave visual meaning to ‘the reality that the game had shifted from the power rating of the amp to the tonal quality of the sound it projected. It was no longer about Loud; it was now about Tone. Less powerful amps enabled more dynamic playing within a tighter volume range: There was no need to turn it up to eleven. The Spinal Tap era of Loud had met its match; common sense had finally kicked in.

In the drum world, because audio techs and recording engineers had trouble dealing with so much sound, some drummers had tried various things and techniques to ‘turn down’ their volume without actually having to hold back on their playing. Rubber mutes and pads deadened the response but killed the resonance and tone in the process, leaving only the sound of a wooden stick hitting a plastic head. Thwack, thud, ding.

For those seeking some serious quiet there were electronic kits. But those aren’t the ‘real thing’, are they? Rubber pads, electrics to plug in, cables to connect, the need for amplification…. But that is another story. They don’t resonate. They don’t have tone. With respect, they’re like the karaoke of drums in that they attempt to be like the real thing. But they’re not the real thing. And we’re talking about the real thing, so, moving along….

However, the rapid rise in popularity of electronic kits did spark drum and cymbal companies into doing something for those who out of necessity or choice wanted drums that could perform at lower volumes. It was easy with electronic kits because like those guitar amplifiers they have a volume knob and a headphone jack. Real drums and cymbals have neither. Instead drummers must choose their gear and adjust their playing to be quieter…or louder. For many drummers that is inconvenient, difficult, even impossible. “The drums are too loud…don’t play so hard” is commonly heard (or thought). So, what’s a drummer to do?

Those drum and cymbal companies, in their effort to compete against electronic kits and stymie the “Turn down” comments directed at drummers on acoustic kits came up with cymbals perforated by hundreds of holes, rubber or silicone drum and cymbal mutes, plus various heads to either bring down the volume of soften the attack. One cymbal brand’s marketing said, ‘Don’t Hold Back’. But largely it was about ‘choking’ the volume, killing the tone and, well, offering nothing positive sound-wise. Those options compromise sound for the sake of keeping the volume down in practice and rehearsal situations but offer little if anything in performance and recording situations. How can a drummer have their own personal sound when there is no resonance, tone or dynamic range to be had from their ‘turned down’ gear?

At Adoro, just like those guitarists with their amps, we recognised the need for drums designed to reduce the volume and boost the tone. Our Worship Series drums can get loud when you push your playing, but not as loud as other drums. Like those lower-wattage guitar amps, the achieve tone without being loud. And they don’t sound ‘muted’, ‘dead’ or ‘padded down’. Instead, their suspension-mounted shells resonate freely, with the air bouncing between the heads to generate warm, musical tone that sits inside the music happening around it. You can tune higher for brighter, more cutting responses, or lower for deeper, darker and more funky and soulful sounds. The vibrancy of the specially designed shells – choose Maple for brighter tone, or Walnut for darker responses and a tighter volume range – make these ideal for volume-sensitive venues including churches, schools, concert halls, clubs, studios…even the biggest stages because these drums sound phenomenal with mics. By not being too loud, the sound can be totally controlled by the audio tech.

How well do they do this? Readers of Germany’s Drumheads magazine voted the Worship Series Dream Drum Set of the Year. In America, where Adoro is known mainly by tone aficionados, music instrument retailers nominated it for the MMR Magazine Dealers Choice Award. Like perfectionist auto makers Maserati and Porsche, we focus on better, not bigger.

So, in a world where drums are often too damned loud, there is finally an answer that doesn’t mute your dynamics, kill you tone and take the fun out of drumming. With Adoro Worship drums you get to play as you normally do, sound great and never be too damned loud.